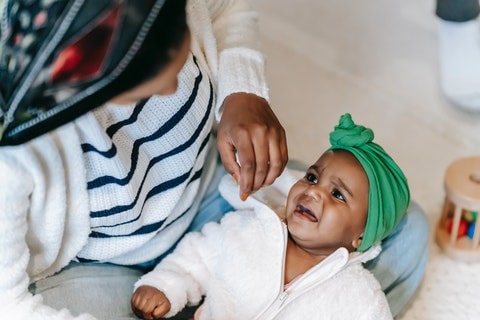 Is your 1-year-old toddler throwing tantrums? Are you questioning your parenting techniques for this? If so, then nothing to worry about as it is normal for childhood. Sometimes you might notice your child is happy and playful. But after 60 seconds, they might burn in rage. Tantrums began to happen while your baby was eating, bathing, during a diaper change, and at sleeping time. Sometimes you cannot think about what to do as it gets out of control. You might see that your toddler is a fiery ball of rage who is hitting his head against the wall. Therefore, tantrums can be frustrating for parenthood. As a result, you must treat it cautiously rather than a disaster.

But do you know what tantrums are? Well, when you see your toddler engage in inappropriate behavior like excessive anger and frustration, you can call it tantrums. They come in different shapes and sizes based on the child’s personality. Children can be crying, falling, running away, screaming, flailing about, or having stiffening limbs. Sometimes you can see them hold their breath, break things, vomit, or get furious as part of tantrums.

Multiple reasons can cause tantrum issues. Tantrums are normal for children between 1-3 years, and it is so because their emotional and social skills develop at this time. As they cannot express their emotions by words, they think their inappropriate behavior can influence others. Children throw tantrums so that they can express and manage their feelings. But several things lead to such cases. They are as follows.

Ways to discipline a 1-year-old who throws tantrums?

So, now, as a parent, you have only one question in your mind. How to manage these tantrums, right? Well, there is only one solution that fits all if you want to deal with tantrums. Child experts say that most parents give their children whatever they want when they are begging and bribing. As a result, when they do not get the things they want, they throw tantrums.

In such cases, as a responsible father and mother, you must teach them that no means no. But for this, you have to act calmly to take your kid under control. The child specialists say that it is crucial to concentrate on a child’s behavior, and parents should never harm them emotionally while disciplining. There are some ways parents can control tantrums. So, if you want to deal with 1-year-old tantrums, go through the below tips. These will help you to calm down your toddler.

If your baby is throwing tantrums, the first thing you can do is to overlook or ignore the situation. For this, you must take your attention away from you by walking out of the room. Doing this would not reinforce their inappropriate behavior. But remember that you have to check them frequently to avoid complications because they might harm themselves if you cannot fulfill their wishes.

According to many experts, we have to let toddlers get out their anger. So, let them be and ensure that they never hurt them or others in that process. It will assist them in learning how to release anger in a non-destructive way. If you follow this tip, you can see that they will get their feelings out and regain self-control without much effort.

Letting your baby be angry does not mean you offer them the chance of doing any unnecessary thing. So, if your infant is hitting, kicking, raging, biting, or throwing objects, you must stop them immediately. After that, you have to teach them that doing these things is not acceptable, and they cannot get anything by doing this behavior. Besides, if you notice they are very annoyed and bothered, take them out sometime.

Kids consider their parents as role models. They imitate the things you do and babble what you speak. As a result, when they throw tantrums, you never shout at them and raise your voice. As a responsible father and mother, you have to remember that they are feeling depressed and sad, and that is why you must treat them affectionately to calm them.

Suppose you are on a long drive and want to enjoy the journey. But your child is restless and throwing tantrums. In such scenarios, you can apply a strategy by telling them to stop doing this behavior, and you will get your favorite chocolate. You will see your infant sitting silently. But pretending is not applicable every time. You must offer them some rewards if you notice your child is listening to what you instruct.

As you might know, you can easily distract young toddlers. So, if they throw tantrums, you can rely on short and simple commands to grab your kid’s attention. But for this, you have to learn a bit. You can tell them to let us color rather than telling them to always be good. Besides, you can also divert their attention by instructing them to water the plants. All these easy-to-follow commands can help you to calm your children down.

Sometimes you might notice that kids get frustrated because they cannot wear their t-shirts or put on their footwear. In such cases, if they are continuously screaming and crying in these minute issues, help them out immediately. You can teach them the correct way to perform these acts to feel a sense of success.

When parents take their children out to a park, they might be urged to climb a ladder. But parents restrain them for safety issues. As a result, kids get furious and throw tantrums. In such circumstances, you can say I know you can climb up high, but now, you are not allowed as you might get hurt. You can climb the ladder when you are big. If you tell them this, you can control their tantrums and cheer them up also to climb high in the future.

When kids are having public tantrums, you must move them to another place without shouting. You can take them to your vehicle or an isolated area so that they can control their rage. You should explain your position and try to overlook the tantrums. According to child experts, parents can stroke their toddler’s hair to soothe them. Besides, if you still cannot calm them down, head back home immediately.

If you want to discipline a kid who throws tantrums, you must encourage them to learn new things and skills. Not only that, but you also have to praise them for boosting their self-confidence. In the end, you will see your kid is calmer.

Some parents laugh at their kid’s tantrums to avoid public embarrassment. But due to this, toddlers repeat the same thing, and parents feel more discomfort in front of others. But if you get irritated and shout, people might stare at you. Therefore, it is always wise to laugh it off and teach your kid not to calmly do these things in public.

To manage their tantrums, you must offer them a sense of control. So, before going to a park, tell them they can ride their favorite scooter for two hours. After that, they have to come back home. If you warn them about this, there will be no sign of tantrums afterward.

You should never enable yourself to feel blameworthy because your child throws tantrums. Sometimes your infant might exclaim that I hate you or I do not like you. But as a parent, you should not take this inappropriate behavior personally and get out of control. After all, your little toddler’s first love is their parents, and as a result, their actions are not for you. They express their frustration by these words. Hence, be calm and try to understand them to manage their tantrums.

Sometimes it is wise to fulfill their wishes. So, when they constantly request you to give something, try to contemplate it.

Other valuable considerations to manage tantrums

Apart from the above tips, consider several factors also when you discipline a 1-year-old who throws tantrums. They are as follows.

Since infants cannot communicate what they feel, it makes perfect sense that they have tantrums and shed tears to express their feelings. After all, they are not developed enough to express their emotions, and as a result, they scream and cry profusely for petty issues. So yes, it is natural to have some tantrums.

What should you do after a tantrum?

After a tantrum, you can appreciate your infant for reacquiring control. For this, you can tell them I like how you control your anger. You also have to adore them as they will feel alone if you cannot give them time and attention.

After a tantrum, you must hug your baby and offer assurance to feel them lovable. Experts say that parents must focus on their sleeping time to manage tantrums. Without proper sleep, they might get hyper and disagreeable. If they sleep enough, you can reduce tantrums significantly. Besides, if possible, go to a nearby place for a walk after their tantrum. Doing all these things after a tantrum will make your child feel protected, and they also behave adequately.

How to reduce toddler tantrums?

There are a few things that you can apply to reduce your kid’s tantrums, and they are listed below.

To conclude, we can say that dealing with toddlers’ tantrums is a daunting and challenging task. You might get overwhelmed and puzzled, especially if your kid misbehaves in public places. But you have to act calmly and maturely to discipline a 1-year-old who throws tantrums. For this, the above tips and considerations will be your guide. Remember that a child is a kid after all, and as a result, they can never distinguish between good behavior and what is not. As a parent, it is your responsibility to teach them decent practices affectionately. So, contemplate the above tricks and get rid of such issues.

Why parents are the best teachers

Good Age to Move Out of Parents House

How to Convince Your Asian Parents to Let You Go Out

1 thought on “How to discipline a 1-year-old who throws tantrums?”