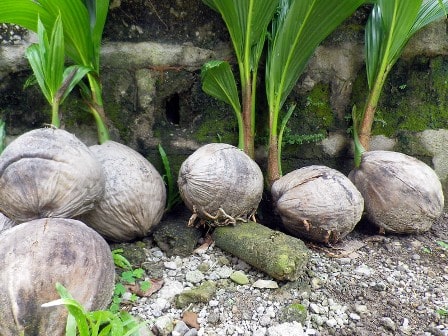 Who doesn’t love cool refreshing coconut water to drink on a hot day? Coconut water contains much-needed electrolytes for our body. The inner white pulp of the coconut is also nutritious to provide you enough calories to survive. It is true that this husked fruit can be a lifesaver if you are ever lost on an isolated island. One fun fact about coconut is that though it is called a nut, it is actually not a nut.

Growing a coconut plant from a store-bought coconut requires little knowledge about the fruit. You need to choose the right coconut from the store and it takes time to sprout. The matured brown ones are actually good for planting.

There are many ways to grow a coconut tree from the seed. You can choose either a coconut with a husk or a husked one. Both have different methods of preparing the coconut for planting.

Growing a coconut tree from a store-bought coconut with husk

Some people want to keep it easy by putting the coconut on the ground in a dark warm place. Coconut loves warm places to grow and the outer fibrous husk can be softened keeping in a moist place. But this technique takes time and no guarantee that your coconut is sprouting inside.

Coconut is a monocot tree which means it has only one cotyledon and the white “coconut apple” you have seen inside a sprouting coconut is the cotyledon. The shoot and root come out from one of the eyes present at the top of the husked coconut. Underneath the shoot embryo is present. This process of germinating the shoot and root and coming out through the eye takes time. And then the outer thick fibrous husk makes it harder for the coconut shoot to come out.

It usually takes three to four-month for a coconut with husk to germinate and sometimes it can take way longer up to six months. Maintaining a warm and moist environment is important to speed up the germination process.

Growing a coconut tree from a store-bought husked coconut

If you have bought a husked coconut from a store it becomes easy to monitor your sprouting coconut. Make sure you have bought a matured brown coconut and the three eyes at the top are not damaged. The shoot and root will come out from one of the eyes, most probably from the smaller circular one.

As shown in the above video keep the coconut in water for about three to five days. And then take a plastic bag, put the coconut in it which will maintain the required moisture inside the bag. You can also use a wet cloth to wrap around the coconut not blocking the sprouting eye.

Then, keep the coconut in a warm, dark place until the green shoot comes out. It takes about one month to shoot appear from a husked coconut. Later, you can transfer to a place where direct sunlight falls when both the root and the shoot kinda grow about four to five inches long.

Planting a sprouted coconut in the soil

Your coconut seed has germinated and now the time to plant it in soil. Some people love to plant coconut in a pot and some in open ground.

While planting the germinated coconut in a pot you need to know the variety of the coconut you are growing. Some dwarf varieties do grow in small spaces and do not require much space. While some grow into a big tall trees with huge roots that can grow only in an open space.

While growing coconut in a pot you should note that your container is 12 inches deep and can hold about 10 gallons of soil and is well-drained.

Fill your pot with well-drained soil maintaining a pH of 5 to 8. Sandy, loamy soil is good for coconut three. You can use green compost or NPK(nitrogen, phosphorus, and potassium) combination fertilizer for better growth.

Initially, you may need to water your potted coconut three times a week and then once a week when the roots grew long. One inch of watering is needed during the initial days of planting coconut trees.

Preferably select a place not too close to a big tree, big trees have big roots that take up most of the nutrients and water from the soil. Big trees do cover a large area making it difficult for the sunlight to fall directly. You can grow coconut in the US in an open space where the weather does not go freezing cold, mostly Hawaii, southern and central Florida have higher chances of growing coconut plants well.

After you have decided where to plant it, make a pit not less than 1.5 meters deep, make sure you fill the pit with red loamy, sandy, and well-drained soil. Natural compost is good for this plant that does not mean you can not use chemical fertilizers in the right amount.

Water your plant twice a week. Depending upon the plant size the quantity of water may differ. Water two to three liters of water to a new coconut sapling or five to seven liters of water if it has grown big. If it’s the rainy season may not need it twice a week. In the early stage when the coconut sprout is growing it needs generally more water.

After the successful planting of a coconut tree, the tree can survive more than fifty years, the dwarf variety has a little less lifespan. The coconut tree grows very slowly and starts giving fruits from six to ten years. The time for harvesting coconut can differ according to the variety and location of the plant. It also depends on whether you just want the cool refreshing coconut water or you want the matured white coconut pulp.

Salt is not a necessary item to add to the soil of a growing coconut. Coconut can grow in any well-drained soil in warm weather. Keeping the soil moist is a must!

How To Grow A Banana Tree with A St... x